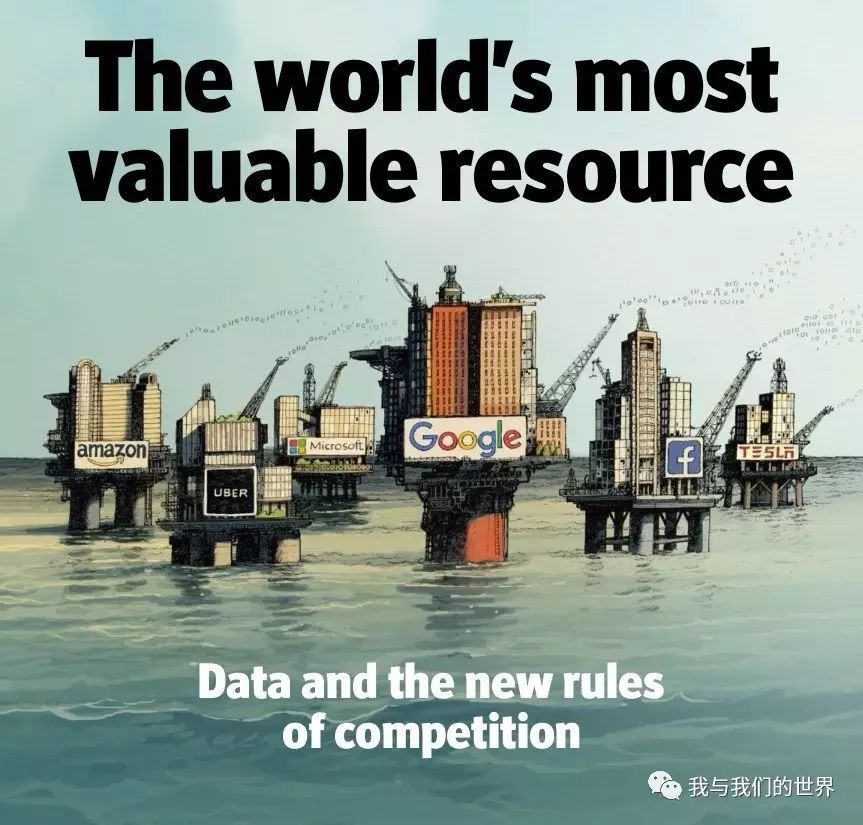 The world’s most valuable resource

Vast flows of data give some firms unprecedented power. To keep them in check, antitrust rules must catch up.

A NEW commodity spawns a lucrative, fast-growing industry, prompting antitrust regulators to step in to restrain those who control its flow. A century ago, the resource in question was oil. Now similar concerns are being raised by the giants that deal in data, the oil of the digital era. These titans—Alphabet (Google’s parent company), Amazon, Apple, Facebook and Microsoft—look unstoppable. They are the five most valuable listed firms in the world. Their profits are surging: they collectively racked up over $25bn in net profit in the first quarter of 2017. Amazon captures half of all dollars spent online in America. Google and Facebook accounted for almost all the revenue growth in digital advertising in America last year. Such dominance has prompted calls for the tech giants to be broken up, as Standard Oil was in the early 20th century. This newspaper has argued against such drastic action in the past. Size alone is not a crime. The giants’ success has benefited consumers. Few want to live without Google’s search engine, Amazon’s one-day delivery or Facebook’s newsfeed. Nor do these firms raise the alarm when standard antitrust tests are applied. Far from gouging consumers, many of their services are free (users pay, in effect, by handing over yet more data). Take account of offline rivals, and their market shares look less worrying. And the emergence of upstarts like Snapchat suggests that new entrants can still make waves.

But there is cause for concern. Internet companies’ control of data gives them enormous power. Old ways of thinking about competition, devised in the era of oil, look outdated in what has come to be called the “data economy” . A new approach is needed.

Quantity has a quality all its own

What has changed? Smartphones and the internet have made data abundant, ubiquitous and far more valuable. Whether you are going for a run, watching TV or even just sitting in traffic, virtually every activity creates a digital trace—more raw material for the data distilleries. As devices from watches to cars connect to the internet, the volume is increasing: some estimate that a self-driving car will generate 100 gigabytes per second. Meanwhile, artificial-intelligence (AI) techniques such as machine learning extract more value from data. Algorithms can predict when a customer is ready to buy, a jet-engine needs servicing or a person is at risk of a disease. Industrial giants such as GE and Siemens now sell themselves as data firms.

This abundance of data changes the nature of competition. Technology giants have always benefited from network effects: the more users Facebook signs up, the more attractive signing up becomes for others. With data there are extra network effects. By collecting more data, a firm has more scope to improve its products, which attracts more users, generating even more data, and so on. The more data Tesla gathers from its self-driving cars, the better it can make them at driving themselves—part of the reason the firm, which sold only 25,000 cars in the first quarter, is now worth more than GM, which sold 2.3m. Vast pools of data can thus act as protective moats.

Access to data also protects companies from rivals in another way. The case for being sanguine about competition in the tech industry rests on the potential for incumbents to be blindsided by a startup in a garage or an unexpected technological shift. But both are less likely in the data age. The giants’ surveillance systems span the entire economy: Google can see what people search for, Facebook what they share, Amazon what they buy. They own app stores and operating systems, and rent out computing power to startups. They have a “God’s eye view” of activities in their own markets and beyond. They can see when a new product or service gains traction, allowing them to copy it or simply buy the upstart before it becomes too great a threat. Many think Facebook’s $22bn purchase in 2014 of WhatsApp, a messaging app with fewer than 60 employees, falls into this category of “shoot-out acquisitions” that eliminate potential rivals. By providing barriers to entry and early-warning systems, data can stifle competition.

Who ya gonna call, trustbusters?

The nature of data makes the antitrust remedies of the past less useful. Breaking up a firm like Google into five Googlets would not stop network effects from reasserting themselves: in time, one of them would become dominant again. A radical rethink is required—and as the outlines of a new approach start to become apparent, two ideas stand out.

The first is that antitrust authorities need to move from the industrial era into the 21st century. When considering a merger, for example, they have traditionally used size to determine when to intervene. They now need to take into account the extent of firms’ data assets when assessing the impact of deals. The purchase price could also be a signal that an incumbent is buying a nascent threat. On these measures, Facebook’s willingness to pay so much for WhatsApp, which had no revenue to speak of, would have raised red flags. Trustbusters must also become more data-savvy in their analysis of market dynamics, for example by using simulations to hunt for algorithms colluding over prices or to determine how best to promote competition.

The second principle is to loosen the grip that providers of online services have over data and give more control to those who supply them. More transparency would help: companies could be forced to reveal to consumers what information they hold and how much money they make from it. Governments could encourage the emergence of new services by opening up more of their own data vaults or managing crucial parts of the data economy as public infrastructure, as India does with its digital-identity system, Aadhaar. They could also mandate the sharing of certain kinds of data, with users’ consent—an approach Europe is taking in financial services by requiring banks to make customers’ data accessible to third parties.

Rebooting antitrust for the information age will not be easy. It will entail new risks: more data sharing, for instance, could threaten privacy. But if governments don’t want a data economy dominated by a few giants, they will need to act soon.