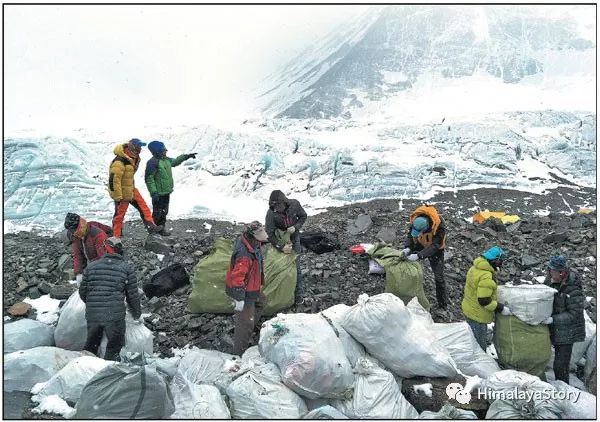 LUKLA,Nepal - Qomolangma, known as Mount Everest in the West, once negativelyrecognized as the "world's highest junkyard", is set to becomecleaner as 30,000 porters have been mobilized for waste collection and disposalfrom the mountain's southern side.

Thecleanup drive was launched recently near Lukla airport, one of the world's mostdangerous airports yet a vital gateway to the world's highest peak.

"Ourmajor task is to keep Everest, which is the pride of the world, clean. Thiscampaign aims to transport 100 tons of nonburnable garbage from the Everestregion to Kathmandu in 2018," Ang Dorje Sherpa, chairman of the SagarmathaPollution Control Committee said.

TheSPCC, an environmental conservation organization, has made it mandatory since2013 that every climber should carry down 8 kilograms of trash, but fortrekkers there is no such regulation. Due to this, more than 100 tons of wastegets collected in the region annually.

Thetrash was collected by local groups in more than a dozen villages while thewaste was transported down the mountain in sacks by porters and yak-hybridanimals known as zopkyos. The cleanup covered settlements from up to 5,000meters near the base camp, to Lukla airport located at an altitude of 2,805meters.

Onthe first day of the campaign, several tons of waste was sent off to Kathmandufrom Lukla on planes belonging to Tara Airlines, a subsidiary of Yeti Airlines,one of the leading private airlines in Nepal.

Theairlines have set an ambitious target of flying out 100 tons of waste from theregion in 2018, as a part of its commitment to the UN Sustainable DevelopmentGoals against climate change.

The company's CEO Umesh Chandra Rai said: "Wehope that this campaign will help the local people to maintain a pristine,natural and unspoiled environment so that more trekkers will come fromeverywhere, making the trekking industry here more sustainable."